Jonathan Whitelaw is an author, award-winning journalist and broadcaster.

After working on the frontline of Scottish politics, he moved into journalism. Subjects he has covered have varied from breaking news, the arts, culture and sport to fashion, music and even radioactive waste — with everything in between. His work has appeared in The Sun, Daily Mail, Scotsman, STV and The Scots Magazine as well as numerous international newspapers and websites.

He’s also a regular reviewer on the BBC – specifically for arts reviews on The Afternoon Show on BBC Radio Scotland.

Jonathan also regularly contributes to book events and festivals, with appearances on the Blood Brothers podcast and the Bloody Scotland Book Club.

And for the last two years he has presented the Desert Island Crooks panel at the Bloody Scotland crime writing festival.

The people of Penrith are delighted when local businessman, Hal Mulberry, succeeds in his childhood dream of buying the world famous painting, The Esk at Dawn. And he’s determined not to keep it to himself, but to bring it back to the Lake District where it belongs and put it on show for everyone. Hal has a plan to turn Penrith Village Hall into a cultural hotspot – with the painting at its heart. But not everyone is pleased…

Journalist Jason Brazel is delighted to get the exclusive story from Hal. Even if his mother in law, Amita, thinks he’s making a lot of fuss about an ugly piece of modern art. But when Amita uncovers a theory that everyone who’s owned the painting has had their life ruined, she wonders what Hal is really bringing to their town. Curse, conspiracy or dirty-deal, she knows trouble is brewing.

And while the great and the good gather for the unveiling of the painting, someone’s got murder on their mind. And it’s up to Jason and Amita to find who is trying to put people out of the picture…permanently. 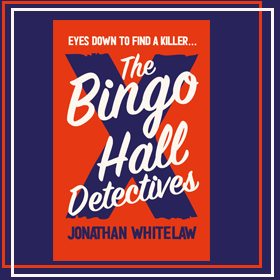 Jason Brazel is an out of work journalist. Let go when his local Penrith paper is shut down, he spends time between school runs, watching daytime TV and feeling sorry for himself. His mother-in-law Amita insists he gets a new job to provide for the family but he’s had no luck.

Amita styles herself as the ‘Sheriff of Penrith’ – she knows everyone and always tries to help. If there’s a charity bake sale, she’s first to volunteer. Well liked by her fellow pensioners, she’s an active hillwalker, crossword puzzler and bingo player. Jason, however, regards her as a busy-body and has no time for her fractured, factless gossip about the local community.

While driving Amita to bingo, the club is shocked to learn that local resident Madeline Forbisher has been found dead. Discovered by the postman, she fell to her death while cleaning the windows of her crumbling country home close to Ullswater lake.

Devastated, Amita reflects on how similar she and Madeleine were. She insists on attending the funeral and makes Jason go too ‘to get him out of the house.’

As they head home after the funeral, Amita says she thinks there’s something not right with Madeleine’s death. Jason, as usual, dismisses his mother-in-law, insisting she’s looking for trouble where it’s not there. However, a drink with a former colleague that evening changes his mind.

The ensuing events mean that Jason makes national headlines, bringing him to the attention of news editors. He thanks Amita for her help and for believing in him and apologies for dismissing her so readily in the past. The family celebrate by taking Edna, Mike, Sandy, Georgie and the rest of the bingo club on a day out on an Ullswater Steamer.