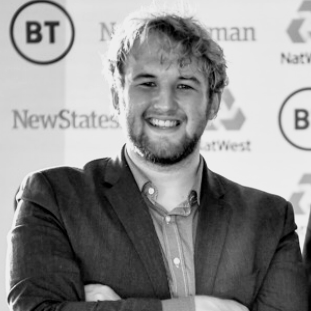 Patrick Maguire is the editor of Times Red Box, and former political correspondent for the New Statesman. Based in Westminster, he reports extensively on the Labour Party, including recent interviews with shadow chancellor John McDonnell, Unite general secretary Len McCluskey and the former Labour MP Robert Kilroy-Silk. He is a regular commentator on topics including the Labour Party and Brexit for national TV and radio. He previously worked in Westminster for The Times and the Observer, and won the 2016 Anthony Howard Award for young journalists.

Left Out by Gabriel Pogrund and Patrick Maguire will draw on exceptional access throughout the Labour party and Corbyn’s inner circle to reveal in full and for the first time the extraordinary story of Labour’s tumultuous transformation under Corbyn’s leadership. A gripping narrative account of Labour’s journey from Corbyn’s zenith, immediately after the general election of 2017, to its humbling at the election of 2019 and a new leadership contest, it will reveal a party riven by infighting, factionalism and crisis. By turns shocking, farcical and tragic, it will be essential reading for anyone who wishes to understand one of the most remarkable periods in the history of the British Left.

As well as an authoritative account of the war within Labour over its Brexit policy and whether to back the calling of a general election, it will shed dramatic new light on what was happening behind the scenes during the antisemitism scandal and the formation of the break-away Independent Group, as well as the plots, failed coups and secret negotiations that were taking place throughout the 2019 general election campaign itself. Ultimately, it will help explain Labour’s collapse at the polls and reveal a party that has fundamentally shifted on its axis, with profound implications for its long-term future.

Left Out was published by The Bodley Head in September 2020.

A stunningly good book with jaw-dropping revelations on every page, Left Out is the ultimate inside story of how Jeremy Corbyn went from the brink of victory to one of the worst defeats in British political history. It is both a breath-taking work of political journalism and a gripping first draft of history that is unlikely ever to be bettered. Unquestionably the political book of the year.

— Tim Shipman, author of 'All Out War'