A few weeks ago, my debut non-fiction book — Meteorite: The Stones From Outer Space That Made Our World— hit shelves in the UK. It is a synthesis of much of what I have learned over the past six years of my meteorite science research as a Master’s student (2014–2015), a PhD student (2015–2019), and an academic research scientist (2019–2020). It was a joy to write, and I am so excited that I can finally share it with the world.

Meteorites are wonderful objects that tell of wonderful things. They tell of the coming together of our Solar System some 4.6-billion years ago from a cloud of incandescent interstellar gas; they reveal how the planets formed from innumerable motes of cosmic dust; and they give clues about the origin of life and water on Earth. The hardest thing about writing Meteorite was deciding what not to include in the book; left to my own devices I am sure I would have written thousands of pages!

My particular area of research for the past half-decade has been the timing, order, and duration of events in the nascent Solar System. Despite forming a whopping 4.6-billion years ago, we can measure the ages of meteorites to within a precision of a few hundred thousand years. That is precision comparable to measuring the height of an average human to within a hair’s breadth. Such measurements give us an unparalleled insight into deep time. 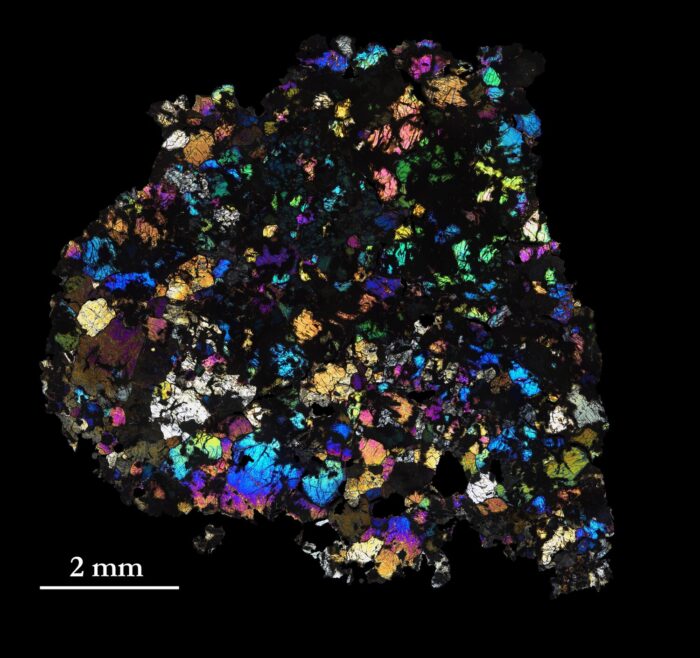 NORTHWEST AFRICA 1586: URELITE | One of the many incredible meteorites in Tim's gallery

During my time as a research scientist I have been lucky enough to work with dozens of different meteorites. Some of them, like the meteorite called Miller Range 11100 that was found in Antarctica in 2011, landed on Earth many thousands of years ago and lay patiently waiting to be discovered by scientists. Others, like the Allende meteorite that fell from the skies of Mexico in 1969, were collected hours after they fell and have since been carefully curated.

As part of my research I imaged lots of meteorites using some of the most wonderful tools of modern science: geological microscopes; X-rays generated by a particle accelerator; scanning electron microscopes; and good old-fashioned cameras. Most of the images I acquired will likely never see the light of day, and so rather than leave them to gather dust on my hard drive, I decided to publish them on my website as a ‘meteorite gallery’ for all to see, enjoy, and use.

This gallery and my book, Meteorite, go hand in hand. In fact, many of the meteorites I write about in Meteorite are included in the gallery. Each compliments the other.

The aesthetic beauty of a meteorite is there for everybody to see. Their interlocking crystals, the kaleidoscopic interference colours of the different minerals, and the strange shapes and patterns are enchanting. But as is always the case with science, the more you know about something, the more amazing and beautiful it becomes. Meteorites are no exception.

I hope that you enjoy looking through the meteorite gallery as much as I enjoyed taking and curating the images!

Dr Tim Gregory is a planetary geologist, and the author of Meteorite: The Stones From Outer Space That Made Our World.  You can explore Tim’s Meteorite Gallery here.