I’m an investigative journalist for the BBC where I report for Panorama, the Victoria Derbyshire show and Radio 4’s Today programme among others. I work on long-form original journalism and documentaries – coming up with stories from scratch, researching and presenting them. I also have a radio show on BBC Radio Wales called The Idea.

Never underestimate the power of simple hard work and persistence – especially when trying to get people to listen to your ideas when starting out. Seek out people who will help you navigate systems you don’t understand. Try and work with colleagues you admire and who bring skills to your work you don’t possess (and be that person for them). Make sure you are someone that people really want to work with. Be supportive and kind, always. And bring positivity – because it will take you far when things are not going as planned. 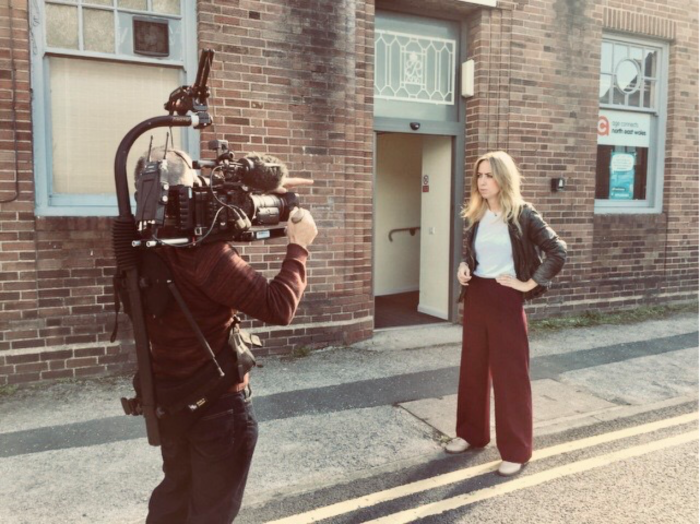 It’s a cliché but the best thing about this job is that you get to live a million different days. I’m either researching a story, out filming it, scripting or editing it. That cycle is pretty the same for each story but the content and the locations are totally different and that is (mostly) a lot of fun.

I studied Broadcast Journalism (very specific, luckily I liked it) at university and got shifts at a local radio station. For me, the important thing I did after university was not go back home (where there was no work) and be willing to work almost anywhere – a friend gave me a bed in Loughborough and so started freelancing across the Midlands where there were lots of different radio stations willing to take on people at the start of their careers. From there I got into the BBC locally, then into BBC youth radio in London and then I moved into TV. The reason I’ve been able to report on so many different programmes is by constantly coming up with story ideas and pitching widely; contacting bosses to see if they will commission the story and then contacting them again when they ignored me, and then again. Also don’t be afraid to shout about your achievements – people need to know what you can do.

I’ve just re-read Americanah by Chimamanda Ngozi Adichie because I love it, Under the Wire by Paul Conroy, War Doctor by David Nott, The Party by Elizabeth Day more than once and I have Poverty Safari by Darren McGarvey in front of me ready to read while looking after baby (she’s 4 months old). Have just finished Ozark and really gutted it’s over, Tiger King (of course), also finally started The Wire. I’m listening to the radio a LOT because of corona so pretty much every day Emma Barnett on BBC 5live. Podcast wise, it’s Slow Burn, This American Life, Desert Island Discs and The Missing Cryptoqueen.