One week ago, I was sat at my desk thinking about the busy week I had ahead of me. The following day I was sat my desk again, but this time surrounded by flowers, cards, donuts and bottles of prosecco, with a company-wide email going out announcing that I had won a Trailblazer Award.

On Tuesday 28 January, the annual London Book Fair Trailblazer awards took place at the Television Centre in White City. 31 publishing professionals under 30 had been longlisted for a Trailblazer award to recognise their success within the industry as they roared through their twenties.

In it’s fifth year, the Trailblazer awards are a highly anticipated event in any young publisher’s calendar, and a fantastic place to network with up and coming talent in the industry.

This years Trailblazer awards began with a short opening speech from journalist Luke Blackall, before author and poet Laura Dockrill gave a hilarious and inspiring keynote speech. Anyone who was witness to Laura’s off-the-cuff speech is now utterly convinced that the best job in the world is that of a grandad – someone who can sit all day, watch TV and have tea brought to them – and it is Laura’s dream career to this day.

Jacks Thomas, Director of the London Book Fair, delivered the final speech before the award ceremony began, reminding all the nominees that they were indeed stars of publishing, all of whom had a bright future ahead.

This was not my first time at the Trailblazer Awards as I was lucky enough to have been nominated in 2019, whilst I was Campaigns Officer at Canelo Digital Publishing. Whilst I didn’t win that year, I was not in the least bit disappointed as the five trailblazers of 2019 were utterly awe-inspiring.

The Trailblazers are open to any under 30-year-old publishing professional, at any point in their career and working in any speciality within the industry. On each long-list there are professionals specialising in everything from editorial to sales, rights to marketing, in all levels from interns to CEOs and in any form of publishing, from trade to educational publishing.

Each area of the publishing industry is represented and it’s wonderful to see and celebrate. 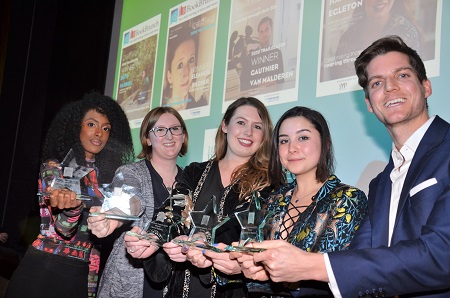 This year the longlist was equally as jam-packed with talent as the 2019 longlist, and before. There were nominees that had started literary trends within the industry, to an under-30 founder of a leading educational publisher. Not to mention a wonderful selection of booksellers who were leading the charge on bringing representation to independent bookshops across the country.

I have no issue in admitting that as soon as I read the biographies of my fellow nominees I gave up all hope of winning an award. However, I was incredibly honoured to be proven wrong.

When Georgia Goodall, the UK chair of the SYP, began describing the second winner of a Trailblazer award I was stunned to hear her begin talking about a Marketing Manager from HarperCollins. I was so stunned in fact that I ended up kicking my guest, Rob, in surprise.

As one of three HarperCollins nominees longlisted – my fellow co-workers Rebecca Fortuin, audio editor, and Joe Thomas, Publicity Manager were also nominated – HarperCollins were leading the charge for nominees in 2020 along with Blackwell’s Bookshop who also had three nominees among their staff.

It was a pleasure to represent my company and to celebrate with my wonderful co-workers after the fact. Becoming a Trailblazer truly is an honour, and a massive achievement which I’m very proud of and extremely excited about!

As part of my prize I, along with my fellow four winners Magdalene Abraha, Beth Farrell, Gauthier Van Malderen and Harriet Egleton, have been invited to be on a panel at the London Book Fair to discuss our thoughts on the future of publishing.

If the list of nominees for the Trailblazers award is anything to go by, it’s looking to be a very bright future indeed.

Ellie Pilcher is the Marketing Manager at Avon Books.