It was 4.30pm last Tuesday. We were about to start a rehearsal for our election night coverage on LBC. I thought I’d better create a fake exit poll. This is what I came up with…

Not a bad guess, was it? Well, if I’m honest it wasn’t what I thought was actually going to happen, more that we needed something to discuss, but in the end it turned out to be quite prescient.

When I saw the actual exit poll, it was right at the start of our eight hour extravanganza. It was quite a moment when I read it out. My co-presenter Shelagh Fogarty’s face was a picture to behold. Even I couldn’t quite believe that it would turn out to be almost wholly accurate. Take a bow, Sir John Curtice.

It may seem odd for a radio show to effectively become a TV show, but it worked. Apart from the main studio where we hosted a series of politicians and analysts, we had a camera point in our newsroom, and also a Data Centre green screen studio where Martin Stanford bedazzled us with graphics which he was also able to explain to the radio audience.

Nicky Morgan and Labour’s Barry Gardiner joined us at the beginning of the night. I felt a bit sorry for Barry – he’s one of the few Labour politicians who gets that to sell their message you have to appear on radio and television. Given the Exit Poll I thought it would be cruel to rub it in too hard. My co-presenter of the For the Many podcast, Jacqui Smith, and former Defence Secretary, Sir Michael Fallon, were with us throughout and we also enjoyed the company of Deltapoll’s Joe Twyman, as well as our team of reporters at counts up and down the country. 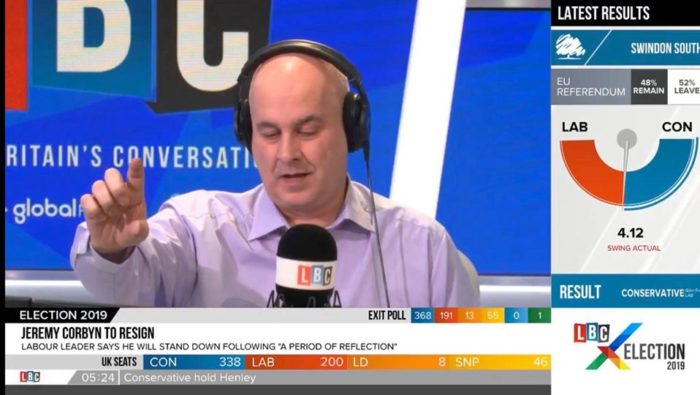 The rest of the eight hours went past very quickly and I hope we acquitted ourselves well. Unbelievably I haven’t seen a single negative comment on Twitter.

I don’t know how many people listened to the show on the radio but our visual figures on the live video streams on Youtube, Facebook and Twitter amounted to close on one million – way more than we could ever have expected.

A truly heroic effort from the 40 or so people involved in the programme’s production. For the political geeks among you, you can watch it back HERE.

From LBC I hotfooted it to Good Morning Britain where I went on air at 7am for two and a half hours with Piers and Susanna. Do watch THIS hilarious clip of Corbynista Grace Blakeley ranting and raving about the huge popularity of Corbyn’s policies. She met her match in me, Jacqui Smith and Ayesha Hazarika.

The next election isn’t due until May 2024, although there will be plenty of landmark events to cover before that, not least next year’s US presidential election. LBC comes into its own on nights like this. I think we create a unique atmosphere, which enables the listener to feel they’re dropping in on an informed chat. We don’t take ourselves too seriously and we’re willing to have a laugh. We are the antithesis of ‘stuffiness’, and a welcome contrast to the rather tired old election night formats we experience on TV.

Long may it continue.

Iain Dale is one of Britain’s leading political interviewers and writers, and presents the Evening Show on LBC Radio.