On the weekend of the 8th June, I had the privilege of attending the Cheltenham Science Festival 2019 as a speaker. The Cheltenham Festival hosts some of the world’s best-known scientists, big thinkers, and comedy geniuses, so I was incredibly humbled to be invited to speak at two of their events over the weekend. The first event, titled Astronaut Bootcamp, was led by myself and three fellow candidates from BBC2’s Astronauts: Do You Have What It Takes? and was designed to challenge children to see if they had what it took to become an astronaut. The second event, called Sky Stones, was a talk focused on my own academic research into cosmochemistry and planetary geology.

Fortunately, the unseasonably cold and rainy weather failed to dampen the festival spirits, and I arrived in Cheltenham to a warm welcome from the organising team, a large group of kind and dedicated volunteers, and to my relief, an unlimited supply of coffee. After a quick cuppa with a few of my fellow Bootcamp contestants, we made our way to the impressive marquee to set up the first participatory event.

During Bootcamp we tested 120 children to see if they had what it took to make it into space. There were four stations, each with a test or an activity: the memory test, the origami test, the teamwork test, and the planetary geology preparation. Being a research scientist, I ran the planetary geology preparation activity, showing the kids the kinds of rocks they might see on their interplanetary voyage. For their enjoyment, I brought along a bag full of meteorites – real rocks that actually fell from outer space – for them to hold. It was a real joy to witness the children’s astonishment as they held rocks from other parts of our Solar System. Not only are these events educational for children, but they’re also really exciting and can spark a hidden interest in science. Overall, the Bootcamp was a huge success and on reflection, I think the adults enjoyed it just as much as the kids!

After a quick bite to eat and some more coffee (very kindly provided by the festival staff), I headed over to the Apollo Stage. The Apollo stage is an open free stage that allows festivalgoers to catch a glimpse into the exciting world of science. The stage was positioned towards the back of the tent, allowing a dozen or so rows of wooden benches to fill the rest of the space. Before I knew it, I was mic’d up and had loaded my slides onto the projector. I always find that the moments before a talk fly by. I stood eagerly waiting at the front of the stage as the audience trickled in before me. To my relief, by the time I started my talk almost every seat had been filled.

Sky Stones is one of my favourite talks in my repertoire. It’s really a ‘cosmochemistry 101’ and gives a whistle-stop tour of the amazing things we can learn from meteorites, and almost all of the images in it are from my own research. I have a ‘no text’ policy for my slides, as to allow the images of the meteorites to speak for themselves. They are beautiful rocks. As a full-time research scientist who is often found tucked away in the laboratory, there is never much opportunity to share the beauty of my work, so getting to share the joys of science with an audience at Cheltenham was a pleasure. Cheltenham stands out as one of the best public talks I’ve had the pleasure of giving.

By the time my 45-minutes were over, people were standing along the aisles at the side of the tent and along the back. It was a lovely surprise to see that so many people wanted to listen to my talk. I thanked the audience for their time (and the occasional encouraging smile) before delving into a short Q&A. In what was a first for me, I got a few ‘woops’ during the final applause.

After the talk I spent a good half-hour outside the tent showing people a few of the meteorites I had brought along. I could have spent the rest of the day there, but time was pressing on. The crowd of people that gathered around me after the show were so kind and interested to hear all about the strange celestial stones.

The Cheltenham Science Festival 2019 was especially memorable and special to me. The festival was scheduled a week before my PhD viva, which I am excited to say I passed! The talk therefore marks the last live event I delivered as a PhD student. Looking ahead to future public speaking events, I am beyond excited to be able to introduce myself as Dr Tim Gregory.

It was an absolute pleasure to be part of such a legendary science event. I am grateful to the Cheltenham Science Festival for letting me be a part of their magical weekend, the volunteers for making the event run so seamlessly, and the audience for sharing in the joy of stones from space. In a world that so often seems divided, science yet again brings people together to celebrate a shared interest in the natural world. 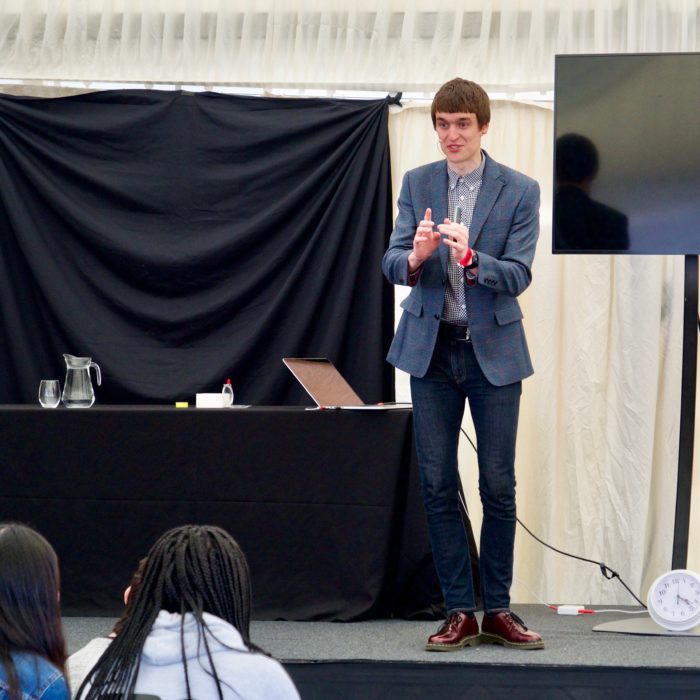