Carla Valentine: A mortician’s guide to fatbergs and fatty wax

When I was first asked to play a role in the documentary Fatberg Autopsy, the request came not long after my involvement in Obesity: The Post Mortem, in which I carried out the autopsy of a clinically obese woman. I did worry for a second that I’d become known as The ‘Fat’ Lady if I continued on that trajectory – but I needn’t have. Although the name fatberg includes the dreaded ‘F’ word, dealing with one was nothing like I’d imagined. We’re probably all familiar with fat as a gooey, yellowish substance and might assume that would be a fatberg’s consistency, but the mass which was pulled from the sewer – thankfully by someone other than me – was more white and chalky and, as I famously said on the show, “…like an old dog-poo that’s lost all of its colour”!

But there is a reason for this consistency and it is more relevant to my job as an autopsy technician than I first thought. Basically, the fats and oils that end up down our drains – whether due to laziness, carelessness or simple ignorance – undergo a chemical change when they mix with the calcium in the sewer water, an environment which is quite badly ventilated. The process is called saponification which literally means ‘turning into soap’, although that’s a chemistry term and the resulting ‘soap’ is not a substance that could replace your bar of Imperial Leather at home.

Bizarrely some human beings partially undergo this process after death, i.e. post-mortem, and it involves similar components to our friend the fatberg: fat (scientifically known as adipose tissue), water, and an alkaline environment. Calcium is, of course, alkaline which is why these processes are so similar. When dealing with this crumbly, caseous substance at autopsy it’s known as adipocere, a word that is derived from the Greek ‘adipose’, meaning fat, and ‘cera’, meaning wax. Fatty wax pretty much sums it up perfectly. And you can see it in the specimen below which is in Barts Pathology Museum’s forensic collection. 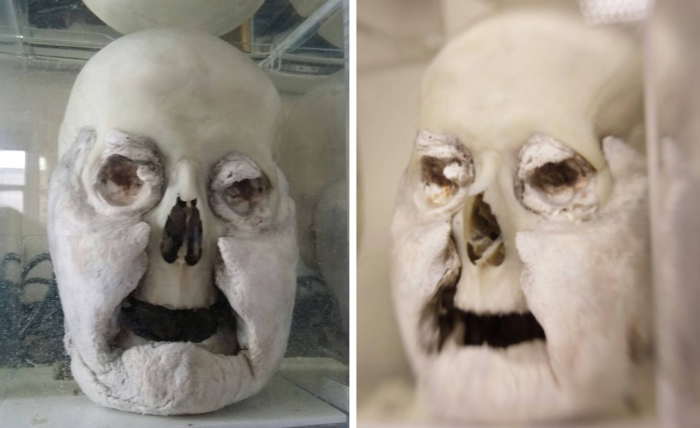 This doesn’t happen to everyone who passes away but can happen if the deceased is in an environment which is humid and may contain few bacteria – perhaps wet ground, a sealed coffin or the bottom of a lake. But it’s not just the environment which is relevant: the amount of body fat plays a role too. In order for saponification to occur fat has to be present and, biologically, women and infants tend to contain a higher percentage of adipose tissue than men. That said, the specimen above is from a male. The backstory is sketchy but we believe this decapitated head was discovered in a septic tank, in East London, around the time of The Krays. A gangland connection was made because the body was separated from the head and because the teeth of this gentleman had been removed by force – both ‘professional’ attempts to thwart identification. It seems to have worked: he remains unidentified. A septic tank is another fantastic example of a humid environment which is anaerobic or lacking in oxygen, so this is a classic case of grave wax formation. And the fact it’s mainly on the cheeks and chin of the skull indicates that he was a chubby-faced man, if nothing else. What adipocere can do, however, is preserve soft tissues for centuries which means it can also preserve injuries, tattoos and more – fascinating for archaeologists.

So my involvement with the fatberg had me back in very familiar territory, and the horror stories the ‘flushers’ told me about what they’d found in previous fatbergs didn’t put me off. Then again, I’m probably the only person who has been able to trump their stories of butt-plugs and snake skeletons by pulling out a decapitated head.